About the Birmingham, AL Area

From Birmingham's founding through the end of the 1960s, Birmingham was a primary industrial center of the South. The pace of Birmingham's growth during the period from 1881 through 1920 earned its nicknames The Magic City and The Pittsburgh of the South. Much like Pittsburgh, Birmingham's major industries were iron and steel production, plus a major component of the railroading industry, where rails and railroad cars were both manufactured in Birmingham. In the field of railroading, the two primary hubs of railroading in the Deep South were nearby Atlanta and Birmingham, beginning in the 1860s and continuing through to the present day. The economy diversified during the later half of the twentieth century. Though the manufacturing industry maintains a strong presence in Birmingham, other businesses and industries such as banking, telecommunications, transportation, electrical power transmission, medical care, college education, and insurance have risen in stature. Mining in the Birmingham area is no longer a major industry with the exception of coal mining. Birmingham ranks as one of the most important business centers in the Southeastern United States and is also one of the largest banking centers in the United States. In addition, the Birmingham area serves as headquarters to one Fortune 50 company: Regions Financial. Five Fortune 1000 companies are headquartered in Birmingham.

OTHER CITIES THAT I COVER

Homewood is a town rich in tradition, pride and Southern hospitalities, yet highly focused with a commitment to ensuring future success and progress for all of its citizens.

Stop by for a visit and you will see why there is no better place to call home than Homewood, Alabama.

Homewood's cultural life is rich and varied. The city has a first-rate public library and places a high priority on fine arts education and programs.

Homewood's city park system rivals any place in the country with activities from a quiet walk surrounded by serene settings to a rousing game of soccer. Homewood's park system is hard to beat.

The Spires of many churches, representing every denomination, reach to the heavens above. Homewood's faith community and citizens enjoy a relaxed atmosphere focused around togetherness, faith and progress.

It's easy to get to Alan Battle's Riverside Marina. We're one block off exit 162 on I-20. Turn left just past America's Best Family Inn 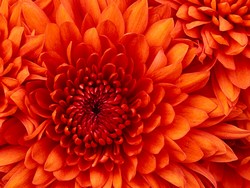 Welcome to the City of Moody, Alabama

We are a small yet fast growing city located along I-20 about 15 miles east of Birmingham. During the past ten years the City of Moody has consistently been at or near the top of the list of the fastest growing cities in the state of Alabama. With a current population of 13,855, our citizens enjoy the benefits of a small town friendly atmosphere while being in close proximity to large city amenities.
We believe in government that promotes both residential and responsible commercial growth. Moody is home to the state's first Miracle League ball field which is located in our state of the art park and recreation facility.
Our schools serve all school aged children in nice newly built or refurbished educational facilities and we have a variety of medical services available to all citizens either within the city or a short twenty minute drive away. With excellent Library, Police, Senior, Fire and Public Works services, the city stands ready to serve you.
Moody is now seeing a surge in the commercial growth needed to catch up to recent residential growth. The city possesses both large and small commercial properties having interstate and major highway visibility and/or access. As more people learn about our city, our progressive attitude toward growth and a warm small town atmosphere becomes apparent. During 2012 we will be celebrating our 50th anniversary as a city. I would like to encourage you to come visit our city and celebrate with us.
I am proud to call Moody home and know that it is a great place to live, work and raise a family. If I can be of assistance, please do not hesitate to contact me. 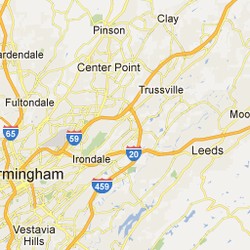 Welcome to Shelby County, the fastest growing county in the State of Alabama. Encompassing approximately 800 square miles in Central Alabama, the County offers diverse amenities in a temperate climate with dramatic landscapes. Recreational opportunities flourish throughout the County, from our city and county parks to the 10,000-acre Oak Mountain State Park.

Businesses find Shelby County equally as unique and attractive as the people who choose to live here. Areas such as the 390-acre Shelby West Corporate Park, is a sample of industrial developments that provide an increased economic benefit to our County. 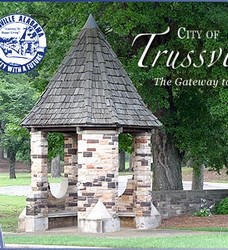 Beautiful St. Clair County Welcomes You! Visit Logan Martin Lake for fun.
St. Clair County, a county older than the state, was officially established in November, 1818 by the Second Territorial Legislature and was named after General Arthur St. Clair. 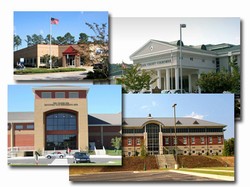 Pell City is open for business. We are located on Interstate 20 in the vital Atlanta - Birmingham corridor. We are within easy reach of all the major markets in the Southeast. We have an outstanding industrial park and our Economic Development Council is ready to assist you in making your business plan work here. Our job training programs assure that our workforce is second to none. The quality of life here is about as good as it gets. Our climate is ideal. We are on the shores of beautiful Lake Logan Martin where lakefront living at reasonable prices is a reality. The quality of our health care system is evidenced by our new (December 2011) state of the art hospital, St Vincent's St Clair. Our educational system is a leader in our state.The recent addition of Jefferson State Community College (2005) provides wonderful educational opportunities for all our people (particularly in the health sciences where we are a leader in producing nurses). In 2004 we established our city as a cultural center in our state with the opening of the Pell City Center for Education and the Performing Arts which is home to a 400 seat state of the art theater complete with orchestra pit.

Our Lakeside Park is home to our Civic Center with facilities for meetings large and small. Our thriving and growing tennis program is led by Sarah Stewart recently named Alabama's Professional of the Year. All youth sports are available and professionally managed by our outstanding staff. There are numerous classes offering opportuities for self improvement. Lakeside Park also has a beautiful walking trail, outdoor pavilions, an outstanding playground, fishing and boat launching. 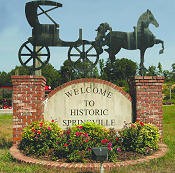 Springville, Alabama is located 30 miles northeast of Birmingham in St. Clair County. The city has a historic past, seen in its old homes and quaint shops and a dynamic future. Here you will find economic prosperity, a relaxing atmosphere, and community spirit. Whether you are a business owner, resident or a visitor, Springville offers something for you. 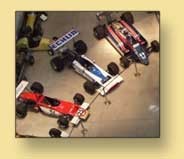 The City of Leeds was incorporated in 1887 as the primary population center of an area known as the Cahaba Valley, a region of fertile bottomland nourished by the Cahaba and Little Cahaba rivers. At first, the War of 1812 and its politics brought families to the Cahaba Trail at Leeds. By 1820, the Cahaba Trail became a road and a major stagecoach route through three counties.
The discovery of rich and valuable natural resources accelerated the region’s growth in the mid- to late-1800s. The discoveries of ore and minerals and the arrival of the railroads brought the Industrial Revolution to Leeds’ doorstep. In fact, as a newly incorporated city, Leeds was named for the noted industrial city of England where a bricklayer invented the Portland cement process.The mineral findings brought Leeds Standard Portland Cement Company as well as population growth to Leeds. , Known today as Lehigh, this company has continuously operated since 1906.